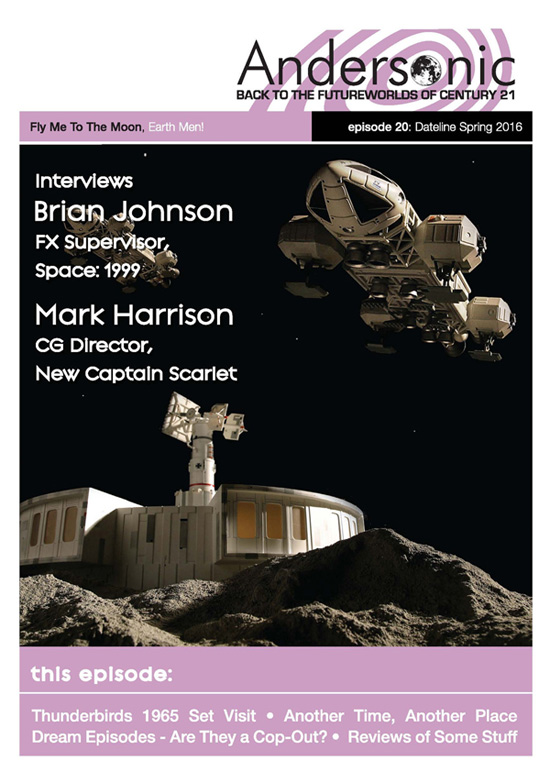 The good news is that Issue 20 of my favourite Gerry Anderson fanzine, Andersonic, has just been released, so it’s time for my usual plug. So, what’s on the menu this issue?

Issue 20 of Andersonic is 44 pages, black & white interiors, and colour front and back covers, both inside and out. There’s lots of lovely photos and artwork to go with the great articles and reviews, and all of this costs a measly £2.75, including p&p within the UK. Check out the website at www.andersonic.co.uk for details on how to purchase the current issue and back issues, most of which are still in print.

Andersonic is, by far, my favourite Gerry Anderson fanzine. It’s a genuine, classic, traditional, “real” paper/print high quality A5 zine, which is a huge plus in my book. There are very few traditional print zines around these days (almost everyone has gone digital) compared to their classic heyday back in the 1970s-1990s. They’re a bit of an endangered species, in fact. So a good one like Andersonic is something truly special. Add to that the sheer quality of this zine, consistently, issue after issue, and I can only applaud Richard Farrell and his talented team for producing this great zine .

The zine has been going for ten years now, which is roughly a six-monthly publishing schedule, although that has slowed down in recent years to an almost annual schedule, alternating roughly every six months with its equally high-quality sister Doctor Who publication, Plaything of Sutekh. We still get a zine every six months or so, but it’s two different zines rather than just the one. It takes a lot of time and effort to put quality zines like this together. I’d rather have a lengthy wait between issues and get a zine of higher quality, than a more frequent release at a lower quality, or, worse still, Richard giving up altogether because of a far too punishing zine release schedule.

I cannot recommend this fanzine highly enough. It deserves as much support as it can get. Buy it. Now.